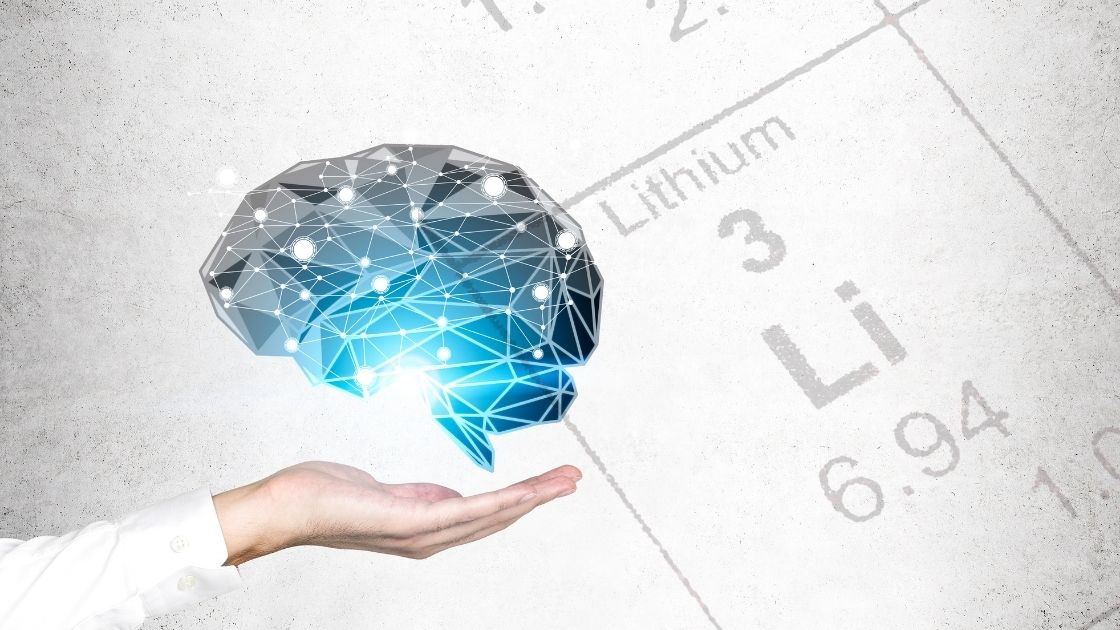 I read a lot of studies on health and genetics, and I keep finding research on the mineral lithium popping up. Topics such as circadian rhythm dysfunction, Alzheimer’s disease, telomere length, type 2 diabetes, and obesity…all linking to lithium?

The rest of this article explains the research showing the importance of this mineral in our health and longevity.

There is a stigma, at least in my mind, around lithium, and I’ve hesitated at times to write about it. Funny, isn’t it, that no one has hesitation about talking about other minerals such as magnesium or potassium. I’ll let you read through the research overview and decide for yourself.

Minerals are needed by the body in the right amount, and it is important to look at the safety and health effects before supplementing with any mineral.

Lithium is a mineral that can be naturally found in food and drinking water. It is also available in low-dose supplemental form (lithium orotate).

Is Lithium Orotate the same as lithium (prescription)?

First, let’s look at the different types and amounts of lithium being referenced in the research studies. Quite a range exists – from natural levels found in water to high levels in prescription meds.

For a lot of people, lithium brings to mind the prescription medication for bipolar disorder. This is almost always in the form of lithium carbonate.

The amount of natural lithium that we get in foods and drinking water varies based on the mineral content of the soil, with estimates of .5 to 3 mg/day.

A provisional RDA  of 1 mg/day is recommended.[ref]

Breaking this down, for an average person, a standard lithium orotate (5mg elemental lithium) supplement would be around twice the normal daily consumption from food and water, while the prescription dosages are closer to 80 to 100 times normal daily intake.

A 2017 study investigated Alzheimer’s rates and natural lithium levels in the drinking water in Texas.[ref] In an article about the study (much quicker read than the full paper), the lead author of the study explains the findings.

Essentially, water samples from almost all of the counties in Texas were tested for their natural levels of the mineral lithium, which varies depending on the concentration in rock and soil.

The study results are not a total surprise since previous studies linked lithium to a decreased risk of dementia, but it is a great confirmation at a large scale population level. Additionally, observational studies show patients taking prescription lithium are at a lower risk of dementia.

You may be wondering at this point why all doctors aren’t handing out low doses of lithium to everyone at risk for Alzheimer’s. I think the quick answer is that it isn’t the ‘standard of care’ with enough clinical trials backing it up. Lithium is a cheap, natural mineral with no money in it for funding clinical trials. There seems to be a couple of ‘novel’ low-dose formulations in the works by pharmaceutical companies, though.[ref][ref][ref]

Telomeres are the sequences of DNA found at the ends of each chromosome. This sequence protects the ends of the chromosome from deterioration. The common example given is to think of telomeres like the plastic on the end of shoelaces that protects the shoelace from fraying. When cells undergo cellular reproduction (mitosis), a little bit of the telomere shortens. Thus, telomere length is considered to be a biomarker of cellular aging. Shorter telomere length has associations with several age-related chronic diseases including Alzheimer’s.

A recent transgenic mouse study found lithium carbonate treatment leads to longer telomere length in mice bred to have Alzheimer’s disease.[ref] Interestingly, the normal mice had no effect on telomere length from lithium. Couple this information with a meta-analysis showing that Alzheimer’s patients have shorter telomeres.[ref]

Telomere length is a new field of investigation for researchers looking into so many different topics of aging, longevity, and disease. I don’t think the handful of studies on telomere lengthening from lithium can really lead to a conclusion on aging. But I look forward to seeing what future studies tell us on the topic.

The anti-Inflammatory action of lithium:

Another recent study looked at the anti-inflammatory effects of lithium on cells containing the SOD2 genetic variant rs4880.  The study found that those with the rs4880 alanine allele (G/G for 23andMe) had more of an anti-inflammatory response than those with the valine allele (A/A for 23andMe).[ref] This was a cell study though, so it is hard to know how well this translates to the whole body.

What surprised me about the Nov. 2017 study that I referenced above was that Texas counties with higher levels of lithium in their water also had lower levels of obesity and diabetes.  I was surprised by this because one of the side effects of long-term, high-dose lithium carbonate usage is an increased risk of hypothyroidism and possible weight gain.

A number of studies have investigated the link between lithium in drinking water and its effect on overall mood — such as aggression (violent crime rate) and suicide.

A meta-analysis of 15 different studies shows that areas with higher lithium concentrations in their drinking water have lower suicide rates.[ref]

How is lithium affecting our body and brain?

For a long time, exactly how lithium worked for bipolar patients was not understood. (Quite a few psychiatric medications were used for decades without fully understanding the mechanisms by which they work – or don’t work – for people.)

Studies over the past decade or two have shed light on the neurobiological mechanisms of lithium and genetic studies have increased that knowledge.

One effect of chronic, low-dose lithium is an increase in BDNF, which is a protein that promotes the growth of nerve cells.[ref]

The American Chemical Society published a great overview of the neuroprotective effects of lithium.[ref] One of the effects of lithium is its inhibition of GSK-3β (glycogen synthase kinase-3 beta), which is involved in neuronal cell development and energy metabolism. Genetic mutations of GSK-3β increase the risk of bipolar disease.

Lithium ions compete with sodium and magnesium ions in the body for binding sites in certain circumstances. The thought on lithium’s inhibitory effect on GSK-3β might be due, in part, to binding to a site normally occupied by magnesium. For a comprehensive overview of the biochemical properties of lithium, including its effect on the activation energy of water within a cell and its effect on mitochondrial function,  read “Towards a Unified Understanding of Lithium Action in Basic Biology and its Significance for Applied Biology.”

One action of GSK-3β is its inhibition of glycogen synthase, which is an enzyme involved in the reaction that takes excess glucose and turns it into glycogen for storage. Thus inhibiting GSK-3β increases glycogen synthesis and increases insulin sensitivity.[ref][ref]

The link between Alzheimer’s disease and circadian disruption is strong.[ref]

A recent article hypothesized that some of the benefits reported for higher lithium levels in the drinking water (lower suicide rate, lower homicide, and crime rates) could be due to lithium mitigating the effects of lead toxicity. “Animal studies demonstrated that lithium pre-treatment mitigates lead toxicity.”[ref]

Many consider lithium to be an essential trace element. Its complete elimination from the body causes a decline in fertility, higher mortality rates, and behavioral abnormalities.[ref]

But, like all substances, there is a toxic upper limit.

Other side effects noted by patients taking prescription levels of lithium chloride include increased thirst and urination, weight gain, and mental dullness. It was theorized that bipolar patients taking lithium may drink more calories due to increased thirst, thus causing weight gain.[ref] Other side-effects of higher doses of lithium include increased risk of kidney problems and hypothyroidism.

Lithium orotate, as a supplement, comes in much, much lower doses than the lithium in prescription lithium carbonate. There is one case report, though, of nausea and mild tremor from a teenager taking 18 tablets of a supplement that contained 100mg of lithium orotate.

If you have questions on any mineral supplement, talk with your doctor or health care provider for medical advice.

Side effects of Lithium Orotate:

There aren’t any recent research studies or case reports (other than the one above) on lithium orotate side effects, so this section is n=1 personal experiences and internet hearsay.

A couple of people that I’ve talked with have reported that lithium may make them tired or a little sleepy during the day. An article from a holistic doctor who suggests lithium orotate to most of his patients notes that very few have any side effects. He does suggest taking lithium orotate before bed instead of during the day. This makes sense in light of the circadian rhythm effects via GSK-3B inhibition.

A study from 1986 on using lithium orotate for alcoholism listed minor side effects to the treatment (included more than just lithium orotate -e.g. low carb diet and other supplements) as loss of appetite, mild apathy, and muscle weakness.[ref]

If you have medical questions, talk with your doctor – especially if you are on any medications or if pregnant or nursing – before supplementing with lithium orotate.

Supplement Doses: Lithium orotate is available as a natural supplement in many health food stores and online (Amazon). You can get it in doses from 5 mg to 20 mg.

Anti-inflammatory: The study on stacking lithium with caffeine, theobromine, and catechin for an increased anti-inflammatory effect was interesting. If you are considering this combo, a good source of theobromine is cacao nibs. Catechins and caffeine are found in green tea.

Lithium orotate is relatively inexpensive as a supplement. It is available on Amazon as well as in a few health food stores.